New model now available, the AS0012-16 has a revised carb pad and plenum entry. 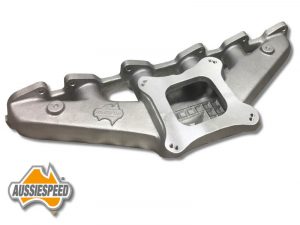 Internal volume of the manifold remains the same, the carburettor can now be bolted both front to back or sideways on the AS0016-16 Ford alloy head crossflow manifold.
EA To AU Carburettor Conversion

EB XR6 Falcon has been converted to a carburettor using the AussieSpeed AS0012 4 barrel inlet manifold, modified distributor & a shot of nitrous oxide. The car is being built as a burnout car in Adelaide the Falcon had a stock broad band manifold removed that was removed and replaced with the AS0012 4 barrel Aussiespeed manifold, 600 Holley and a set of Aussiespeed Tubular extractors. With these items in place a fuel pump fitted, the cars builder reported back to us a gained around 20% in RWHP. With further modifications planned like a bigger camshaft, head work raised compression we are fairly sure the customer will see further improvements the best thing is no more computer hassles. 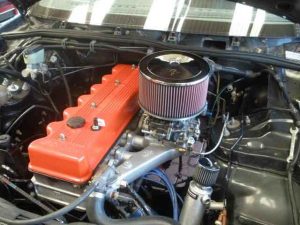 This conversion was done back in around 2008, since then Aussiespeed have had many others do the conversion on naturally aspirated and turbo charged OHC Falcons with great results.Aussiespeed have also developed the AS0242 plenum pig insert, that delivers more torque down low and has been used on mild street engines and in heavier cars and trucks and tow vehicles. We have many of the components required to do the conversion listed in our online speedshop.

The work involved in developing the Aussiespeed Ford 6 cylinder manifold.

AussieSpeed have a performance manifold to suit most Ford 6 cylinder engines. Available in both 2 barrel and 4 Barrel there is a manifold to suit your performance upgrade, our manifolds suit Ford alloy head 200/3.3 & 250/4.1 crossflow engines, OHC Ford falcon EA,EB,ED,EF,EL & AU 3.9 & 4.0 litre overhead cam engines and in 2014 the release of the DOHC Ford 6 cylinder 4 barrel manifold.It is very important when using Aussiespeed 2 or 4 barrel manifolds that you do not port or enlarge the port. DO NOT port the manifold at the cylinder head end unless you have extensive experience in cylinder head and manifold development. Our high velocity manifold is designed in such away that cylinder balance is a major key in performance. The volume of the manifold can feed an engine making big horse power and the runner is larger than any Ford six performance manifold available. We did the development and the small port opening will not affect high rpm horse power, it boosts torque, increases air speed to give not only better down low grunt but allows for better breathing in high RPM situations. The 4 barrel Aussiespeed AS0016 Ford xflow manifold has been used on naturally aspirated 250 C.I engines that have produced 400 + HP.
Many hours have gone into testing and trying different shapes, sizes and a multitude of things when we are developing a manifold. 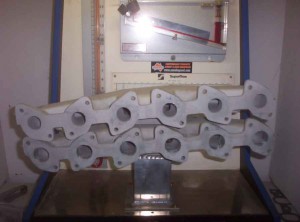 Pictured above are 2 AussieSpeed Ford six performance 4 barrel manifolds that were used to test the high velocity port design on our superflow flow bench but were both dynoed on the same ford six cylinder engine using the same chassis dyno under the same conditions, run up by the same tuner. You can rest assured that Aussiespeed have taken the guess work out of what to do and use when it comes to choosing a manifold for your Ford 6 cylinder Performance engine.
Unlike the Ford crossflow the 4.0L engine does not respond in the same way as the 250 crossflow, the 2 manifolds are different as the OHC does not develop the same power down low. The factory throttle body manifold with its even length runners is one of the best factory produced manifolds we have ever had on our flow bench. the runners flow within 3cfm of each other. the manifold is very restrictive as to produce torque from idle through to around 4800 rpm. These engines are now being fitted to early falcon and cortina s with many being used in street stock and modified production. As these classes need to make power from down low to 6000 + rpm we spent many hours producing a manifold that produces torque down low and still out perform the factory manifold in the higher RPM range.

Aussiespeed Ford 6 cylinder OHC 3.9 and 4.0L straight 6 cylinder engine is now being fitted to Ford TC,TD and TE Cortina ,early Falcons early Ford mustang coupes.To complete the conversion you will need a modified early Falcon modified electronic falcon distributor. We do not modify the distributor for the conversion in house and are built by another company in Australia and a performance type curve is also done as part of the conversion.åÊ The OHC Ford engine now makes an easy upgrade with the use of the electronic distributor and a two or four barrel carb.An E series inline OHC Ford 6 cylinder engine was recently dynoed with an Aussiespeed manifold and modified distributor and had an increase an increase of just over 20% up from the fuel injected computer controlled system. Carb used was a 600 holley vac carb and low pressure electric fuel pump. The car has been used in many burnout competitions and pulls a 4 minute burnout that produced lots of tyre smoke. The manifold will produce for low down torque when fitted with an AS0241 plenum insert.

Pictures from customers of there projects , the black falcon was a burnout car from South Australia with only mods were 4 barrel manifold, modified distributor and a set of extractors. Red Ford OHC with an Aussiespeed 0012 manifold and blow through turbo. 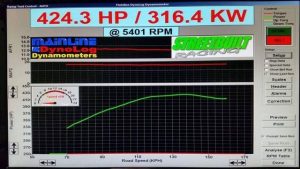 Figures from stock 4.0 with Aussiespeed AS0012, E85 4 barrel carb, front mounted intercooler and turbo. Some very impressive numbers with not a lot of dollars out laid.

The XF is fitted with the turbo 4.0L engine with the dyno figures above 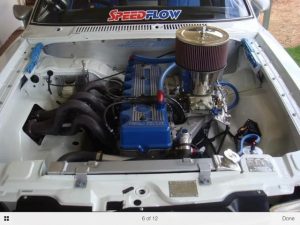 The AS0012 can be used on mild street engines to all out race engines. with a converted distributor also available from in the Aussiespeed online.The manifold has one x 3/8 npt vacuum take off on the rear of the manifold for brake vacuum and auto transmission fitting.The widest point of the manifold from head face to carb pad is 215mm

Welcome to our new website, if you have any trouble making a purchase contact us through the chat box. Dismiss